Pinhole camera Zonder LENSDOP | Pinholestories
“Not about knights and damsels”

“But about a castle, frequently photographed by many amateur photographers. A castle that appeals to the imagination. That's why they call it a photogenic castle. Partly because of the environment, the landscape, and the elements around it, which creates a photographic opportunity Let's face it, Horst Castle is a photographic gem. In real life, but also in the imagination of the viewer. For a generation, this castle has been home to the adventures of the Red Knight, the comic book hero from days gone by. From the time when studio Vandersteen was still just Willy.

For me, a first acquaintance, and immediately a difficult one, with a large pinhole camera, but also with lots of rain. The conditions weren’t ideal for a pleasant photo shoot. No, the conditions were not ideal at all, grey, greyer, greyer. Wet wetter and wettest. Cold, colder, coldest. and so on.

About the shoot
I had planned to make pinhole recordings of Horst castle this day. I didn't want to believe that the weather would be anything but ideal. Until I got there. On one, two and three I was wet, from drizzling rain, which you could hardly see, but you could most surely feel. I coated my Reality So Subtle pinhole camera a few weeks ago, they also call it pimping / customizing the camera. The water droplets gathered on the camera, drop by drop the paint layer of the camera was taken up by this dreaded rain. No problem for the camera, a different story for the film holder. During my first shot, with a 5 minute exposure, I forgot to remove the darkslide first. Back again, ... after the recording, this darkslide no longer wanted to be in the holder. push, push, ... no, the darkslide no longer went to its right place. … Meanwhile I heard the flat film shift and crumple, the harder I pushed on the darkslide, the more resistance I felt. Short pain, everything loose, and, ... a lost sheet. Don't give up, second try, good try, and keep the darkslides dry. Everything went smoothly from then on... no, still.. Murphy and his law really weren’t on vacation yet. To create my compositions with the Reality So Subtle camera, a pinhole camera without a viewfinder, I use a powerful laser pointer to define my viewing angle. On the first shot everything was still correct, on the second shot this pointer started to be less powerful, ie less visible. Was my battery almost empty? The laser pointer gave up on the third shot. No more green dot, not at 10 meters, no, not even at 10 cm. From then on it was almost impossible to make a correct composition with the pinhole camera. So just work following your gut. Later, back home and all dried up, the laser pointer worked correctly. Moisture will also have played a part in this. Just to mention that I wanted to shoot with 90mm, but then my exposure time came to 24 minutes per shot... Just a bit too long in these wet and cold conditions. Hence, I shot exclusively at 35mm and 50mm, with apertures of F 175 and F 166 respectively. (Pinhole apertures of 0.2 and 0.3 mm)


That evening I developed the sheets, using the mod 54 in the paterson Super System 4 tank, Rodinal RO9 in a dilution of 1:50 for 9 minutes as developer, ..stop bath and fix as usual.. I always try to keep a standard for my development. Fomapan 100, exposed as 100 ISO, developed in RO9 , ratio 1:50 for 9 minutes at 20°. This gives me beautiful negatives, which, since 2022, have been digitized with the Fujifilm GFX 50S II. And yes, I know, not the correct way of shooting… shooting with a camera without a lens and shutter and some electronics…. less than the basics, and then digitizing with a "more than fullframe" camera system at roughly the cost of a mid-range car... but that's another discussion. As long as I have fun with this way of shooting, as long as I have a lot of fun with this way of shooting, as long as I have patience with this way of making images, slowly, definitively, really on negative. As long as I feel happy creating images that I like. Technically not perfect, but in my eyes, full of feeling, with authenticity and with a personal vision of the photographer. That feeling... just let me carry on.

So don't forget, the pictures you see here? They are made using only a wooden box with a tiny hole (0.2 - 0.3 mm) and light sensitive film. . I myself am always amazed at the quality, the vision that you achieve with only these basic resources.

(Then I won't say anything about the camera I use to digitize, that's another story) .....


About the camera:
It was mid-October when the RealitySoSubtle 4x5 Z was delivered to my doorstep, all the way from France. A modular 4x5 inch pinhole camera where you can change the focal distance so the camera can be used as an ultrawide to wide camera. The camera has an angle of view from 134° to 84°. In Fullframe terms (24x36) one can speak of a 10mm to 24mm. Wide enough for you?

This camera is really well thought out, the modular parts are anchored to each other by means of magnets, just like the two front plates with the pinholes of 0.2 mm and 0.3 mm and the shutters. This camera is a piece of craftsmanship by James Guerin, the designer and builder of the RealitySoSubtle pinhole cameras. Originally, I wanted this camera for its wide viewing angle. Super wide angle at 4x5 inches. But after using it during this first pinhole session, I fell under the spell of the 90mm. This setting produced a wide image, with normal perspective and little vignetting. I will continue to use it on this specific setting more in the future.


About the film:
Since my fresh start with analog photography I have been using Fomapan negative film. For 35mm and Roll film I have a choice of 100 and 400 iso. For the 4x5 inch sheetfilm I only use the 100 iso. So why did I choose the fomapan? First of all, this film has a large reciprocity factor, whereby the exposure from 1/8 sec at F22 must in reality be exposed for at least one minute. And that's what pinhole photography is all about for me: long exposures. An additional aspect to Fomapan is that it’s also the least expensive film on the market. The exposed films and sheets are always developed in RO9 developer, in the ratio of 1:50

view full resolution
About the location:
The castle of Horst is a castle in Sint-Pieters-Rode (borough of Holsbeek in Flanders). The castle is well preserved and still has the traditional moat surrounding the building. The castle has a very large pond and moat. Outside the moat there is also a coach house, which was restored and converted into a tavern in the 1990s. Herita vzw manages the castle and takes care of the restoration. Prominent in the building is the stucco work of the 17th-century artist Jan Hansche. The castle domain is European protected as part of Natura 2000 area 'Valleien van de Winge and de Motte with valley slopes' The oldest known lords of Horst are Jan van Horst and his son Arnold (13th century). Jan van Horst, together with his sons Arnold and Adam van Landwijk, belong to the Van Thunen family. Later, when they settled permanently in Horst, the family started to call themselves 'van Horst'. In 1369 the seigniory of Horst was sold to Amelric Boote. When Amelric in 1405 died, his daughter Elisabeth inherited the estate and sold it to her cousin Amelric Pynnock. Pynnock converted the fortified farm into a moated castle. During the day the revolt of 1488-1489 against Maximilian of Austria the castle was destroyed. The then owner, Lodewijk III Pynnock, rebuilt the castle with a loan from Maximilian of Austria but ran into financial difficulties. That is why in August 1500 he had to give up Horst to Ivan van Cortenbach. At the end of the 15th century, the square keep, the auditorium and the camera were also added built, which still exist today. Under Franchoys van Busleyden (1545-1555) the large cross windows on the canal side were installed, making the castle its lost character. Horst was destroyed by the beggars in 1587. The forest, close to the castle (the current Horststraat) was then called the heresy. In the 17th century, the two west wings with service rooms below and show rooms added upstairs by Olivier van Schoonhoven. At that time, the chapel was also added. Maria-Anne van den Tympel, the last lady of the castle, had the plaster ceilings in the large halls of the west wing. Castle parties are held every year, where knight games are staged put. In October 2007, Countess de Hemricourt de Grunne sold the castle domain together with the 113 hectares of land around it to the Flemish Region. There was no money more to extend the lease. The Flemish government is investing 3 million euros for restoration works to be completed by 2024. Since the beginning of 2020, extensive restoration works have been carried out on the castle of Horst started. These will take at least 4 years. Hereby the foundations of the castle uncovered. The spire is taken off for restoration. Afterwards consolidation and stability works will be carried out. Subsequently, the interiors with Renaissance finish restored. [1]

A new camera needs to be tested thoroughly. As expected I started playing around with the widest image the RSS 4x5 Z could create.
For this I used the pinhole hole of 0.2 mm. This hole in combination with the 35mm formed the aperture of F175. I measure with an exposure meter where I always measure for an aperture of F22. Using the table below I can calculate a reasonably accurate exposure time, taking into account the reciprocity failure for the Fomapan 100 negative film used.

After removing the darkslide and opening the hole, I wait until the set exposure time has elapsed on the smartphone timer. Close the hole, darkslide back into the flat film holder, turn it over and ready for the next shot. In each flat film holder I can place two 4x5 inch sheets. I use three holders per session, so I can make six recordings. Why six you ask? Because I can develop a maximum of six sheets simultaneously in the Mod54/Paterson development tank. So the six recordings are just for practicality.

I have to say that I am very satisfied with this RealitySoSubtle 4x5Z camera. This camera still has many features that I will use very soon. . Very soon, in an urban environment


No lens, no viewfinder, no electronics. Only a hole, a wooden box and light-sensitive material. In short, the wonderful play of light and shadow captured in a box. 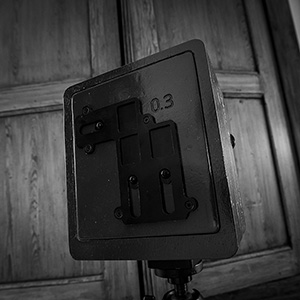 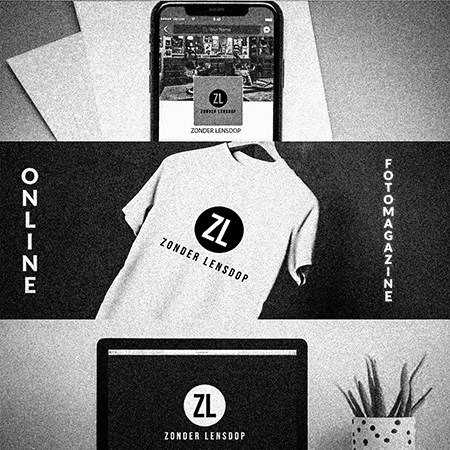